Real snow by Industrial Frigo Ice for one of the most important events for winter sports enthusiasts in Europe!

For years Industrial Frigo Ice has been taking part in Skipass, the tourism and winter sports exhibition held every year in Modena, Italy.

The last edition, before the stop due to the global health emergency, saw us co-protagonists in the realisation of what became the symbol of the whole event: a 151 feet (46m)  high and 426 feet (130m) long ski jump that hosted the only Italian stage of the Big Air FIS Snowboarding World Championships.

Athletes from all over the world were able to challenge each other in breathtaking acrobatics and spectacular jumps on real snow created with our latest generation cooling units. Thanks to Snowvolution, our revolutionary energy saving snow powder machine, we were able to recreate the perfect alpine environment. In fact, the snow powder produced by Snowvolution avoids the problems for skiers caused by crushed ice.

In addition to the snow for the giant slope, Industrial Frigo Ice also created an ice skating rink where experts and less experienced skaters alike were able to take to the ice to try their hand at a few moves or simply a lap around the rink.

Industrial Frigo Ice has created a series of machines for the production of real snow that can be used indoors and outdoors for temporary and permanent events. With these special patented machines it is possible to create real snow for ski slopes or snow playgrounds even at room temperature. The ski slope can be equipped with a mechanical way-up. 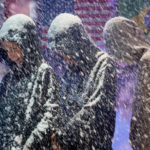 Arctic Ice and Snow are coming to Brazil!